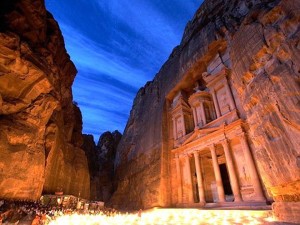 Day 1, Arrival Amman
Upon arrival, a member of our staff will meet you at Queen Alia International Airport for assistance with customs and immigration procedures. Transfer to hotel in Amman. Overnight.

Day 2, Amman City Tour/ Desert Castles/ Amman
Breakfast. Morning city tour of Amman to visit the Citadel, the Roman Theatre and Umayyad Palace as well as the Archaeological and Folklore Museums. Proceed to the Desert Castles. Visit Qasr Amra, Azraq and Kharaneh before returning to Amman. Overnight at the hotel.

Day 3, Amman/ Ajlun/ Jerash/ Salt/ Amman
Breakfast. Depart Amman to visit the village of Ajlun with its fortress and magnificent view into the Jordan Valley. Proceed to visit Jerash; showcasing the grandeur of Imperial Rome, and being one of the largest and most well preserved sites of Roman architecture in the World outside Italy. Proceed to the Old Town Of Salt which is situated 29 km north of Amman. Salt is one of Jordan’s longest continuously inhabited cities, it contains a remarkable architectural and civic heritage including many recently opened museums. Return to Amman . Overnight at the hotel.

Day 4, Amman/ Madaba/ Mt Nebo/ Wadi Mujib/Um Rassas/ Kerak/ Petra
Breakfast. A whole day to explore the King’s highway, which was once part of the ancient Silk Road. Transfer to Visit the Christian Town of Madaba “The City of Mosaics. Visit the church with the mosaic map of the Holy Land from Byzantine times. take a detour to visit the Monastery in Mount Nebo, . The Bible reports that Moses climbed up onto Mount Nebo, coming from the plains of Moab. On the mountain, God showed him “all the land” which was promised to his descendants. Transfer to visit Um Al Rassas. Proceed to visit the crusader castle of Kerak via Wadi Al Mujib, a deep valley holding one of Jordan’s most breathtaking view. Continue to Petra (The City of the Nabateans). Overnight at the hotel.

Day 5, Petra
Breakfast. The visit of the ancient Nabatean Capital starts on horseback, followed by a walk through the Siq, a long narrow fissure between two overhanging cliffs. The tour then proceeds to gradually unfold the mysteries of the Red Rose City with its spectacular treasury, Royal Tombs, burial chambers and high places of sacrifice. Return to the hotel for overnight.

Day 6, Petra/ Beida/ Wadi Rum /Dead Sea
After breakfast proceed to Beida, also known as little Petra and the place where the Nabateans used to entertain their guests. Continue south to the enchanting desert of Wadi Rum, Jordan’s largest desert and one of the most spectacular desert landscapes in the world. Jeep tour inside the Wadi. Watch the most beautiful view while drinking a cup of traditional Bedouin tea. Transfer to the Dead Sea, the lowest point on surface earth. Free time at leisure. Overnight.